~Honoring Those Who Have Valiantly Served~

Military funeral etiquette is a way to show your reverence and respect to a fallen soldier and their family. It is essential that you maintain quiet dignity while they are being honored.

A military funeral is rich in tradition. Those who serve our country, especially in times of war are heroes and deserve the honor that comes because of what they have given. These men and women have given all that they have.

Military funerals are for those who have been killed in the line of duty, retired from any branch of the armed forces or have been honorable discharged therefrom.

The deceased soldier or sailor are honored with:

Military personnel should be in their dress uniform. You understand the importance of saluting the flag and the fallen hero. You should salute:
Family members are reserved the utmost respect during this time. They are to be seated in the front of the chapel or mortuary during the services. At the graveside, they will be seated closest to the casket. 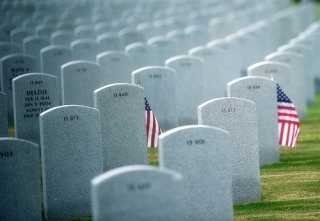 shoulder for support. Good funeral manners are displayed by dressing appropriately. Conservative, dark clothing are appropriate for this time. It does not mean that you wear all black, however your clothes should be modest, clean and respectful.

During the services, follow the lead given by the chaplain or whom ever is presiding. If you are not of the same faith as the deceased, be respectful during their times of silence and prayers. Stand and be seated when asked to do so.

Military funerals are generally not a place for young children. It is difficult for them to understand the reverence that is required by military funeral etiquette. Their little bodies have a hard time sitting still and being quiet for long periods of time. If it is possible, leave them home. If you have to take them, be prepared to leave the services if they become a distraction.

As this is a reverent and solemn occasion, cell phones, iPods and anything else electronic should be turned off. There is a time and a place for everything.

My Grandfather was honored with a military funeral for his service in World War II. Although we were suffering from his loss, it was a blessing to participate in this service. As they tenderly presented my Grandmother with the flag from his casket, our hearts were filled with gratitude and love. The song Taps will always hold a special place in my heart because it represents the service and love he showed us and his country.

God bless all who have served, are serving and will serve. Those who have fallen are not forgotten, they are honored in our hearts forever.

Back From Military Funeral Etiquette to Manners Home