Proper USA flag etiquette shows people how you feel about the country while showing respect for the values and meaning of the flag. Because of what the flag stands for, there is a way to show respect and care for the flag. 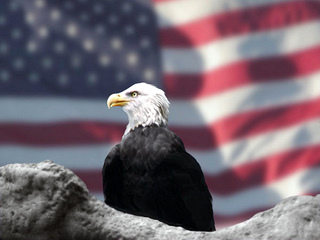 There are a few basic rules that you will want to follow to show proper respect to the symbol of this country:

Depending on the reason for flying the flag, the USA flag etiquette rules change slightly.

When you are flying the flag outdoors, you should ensure that the United States flag is the height of the flag pole. Also, if you are using other flags (state flag, organization flag, etc.) no other flag should be higher than the American flag on the pole.

Along with that, no other flag should be larger than the US flag. It is also customary to ensure that the United States flag is the first to be posted and the last one to be taken down.

Proper American flag etiquette says that the flag should be placed in the place of honor. This is usually defined by being on the right of the speaker or stage. Other flags should be placed on the left hand side.

If a flag is being displayed on the wall, the stars should be placed at the top with the rest of the flag going to the right.

You will notice that most of the rules of flag etiquette have to do with the flag being on the right. This is a symbol of exactness and correctness. Some of the symbolism deals with the flag being placed in the highest spot, or the place of honor. This has to do with respecting the flag, the country it stands for, and honoring those that gave their lives for our freedom.

Although these points discuss how to properly treat the flag, the unwritten message is so much deeper. It has to with gratitude for the freedoms we enjoy, for the opportunities we have, and our blessed abundant lives. That is truly what USA flag etiquette is all about.

Back from USA Flag Etiquette to Manners Home

Back from US Flag Etiquette to Holiday Etiquette